Still struggling to get enough votes to be elected Speaker of the House of Representatives, Rep. Kevin McCarthy (R-CA) tried to “persuade” (you might say) intransigent Republicans with fear — something he specializes in.

“This is very fragile…” McCarthy declared on Newsmax, “…we’re the only stopgap for this Biden administration, and if we don’t do this right, the Democrats can take the majority. If we play games on the floor, the Democrats can end up picking who the speaker is.”

Translation: You better pick me! I’m the only thing that can save you from the dreaded DEM-O-CRATS!

The Red Trickle left the Republicans with only a narrow majority in the House. McCarthy’s threshold for victory could be lowered a bit after the death of Congressman Donald McEachin (D-VA) and through abstentions or “present” votes, but he can’t really afford to lose anyone.

And right now there are at least five Republicans who have publicly declared that they’re solid nays against him.

And so Kevin wants Republicans of the World to Unite! Here’s how he seems to see things: 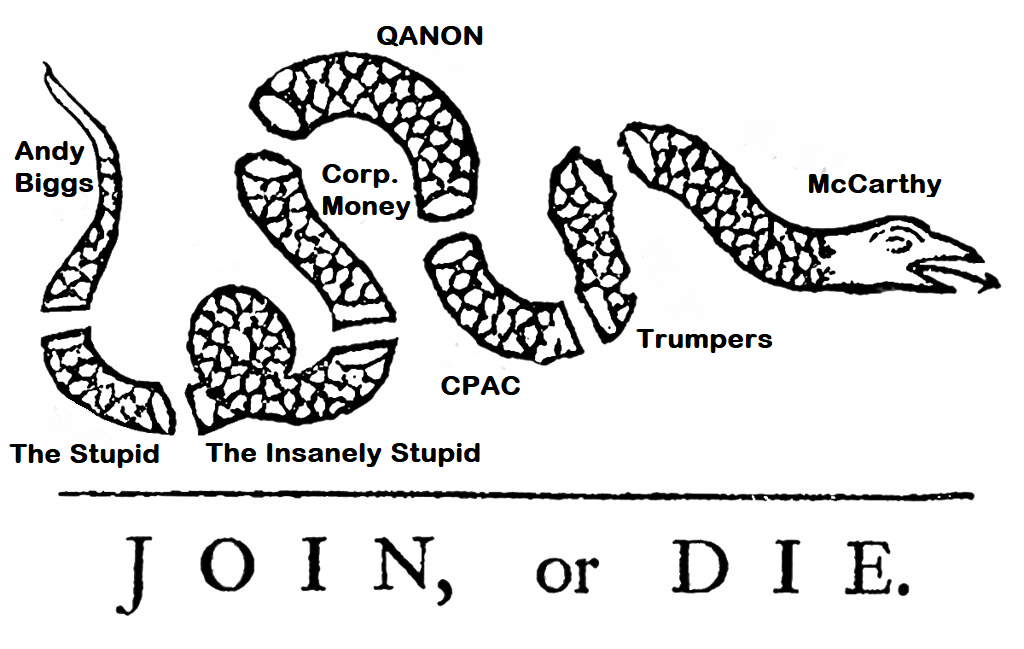 Andy Biggs, who ran against McCarthy for the nomination, says he thinks there are really more like twenty GOPers who won’t support him. If that’s the case, the California congressman may be dead in the water.

They object to McCarthy for various reasons: his perceived weakness on slashing spending, his unwillingness to impeach Homeland Security Secretary Alejandro Mayorkas (though he’s called for his resignation), and (possibly) his sniveling weasel personality (though, he probably only ranks about 98th in the Republican Party for that).

Also, he’s seen as a water carrier for Donald Trump, whose history of losing has alienated many. (SO MUCH LOSING!)

Kevin McCarthy is very bad at this. He is a fake, a phony, a fraud, and a coward. He is in way over his head. https://t.co/3XyNs2bRz4

And so McCarthy is trying to unite the party under a banner of fear. He’s stoked fears about the border, transgender freedoms, and pretty much anything Joe Biden might do.

He and his supporters have also promised a whole slew of investigations into everything from border crossings to Hunter Biden to whether Chuck Schumer took a shit that day (OK, I made that last one up – but who knows!).

Kevin McCarthy has no ideology, no core set of beliefs.

He knows he can't become Speaker without support from the QAnon contingent of his members.

So he will do whatever they ask, and remove me from the Intel Committee for holding Trump accountable.

He stands for nothing.

Now go whine in a corner somewhere and leave the rest of us alone.

Undoubtedly, Kevin won’t like Ross too much either. But you can – on Twitter! Show him some love there as he goes after the GOP! @RossRosenfeld