Former president Donald Trump isn’t a happy camper these days. But then again, when is he ever?

This time the twice impeached wannabe dictator had a Grade A meltdown over rumors that a pro-impeachment Republican could become Speaker of the House.

Rep. Fred Upton (R-MI), who voted to impeach Trump, has been touted as a potential contender for the legislature’s top spot — and the cry-baby-in-chief is in quite the mood, raging on his fledgling social media platform, Truth Social.

“Rep. Fred Upton, a Pro-Impeachment RINO would be a disaster for anything having to do with the word Republican, but especially when it comes to Speaker of the House,” Trump ranted.

But he didn’t stop there. No rant would be complete without the narcissistic democracy hater boasting about his endorsement “record.” 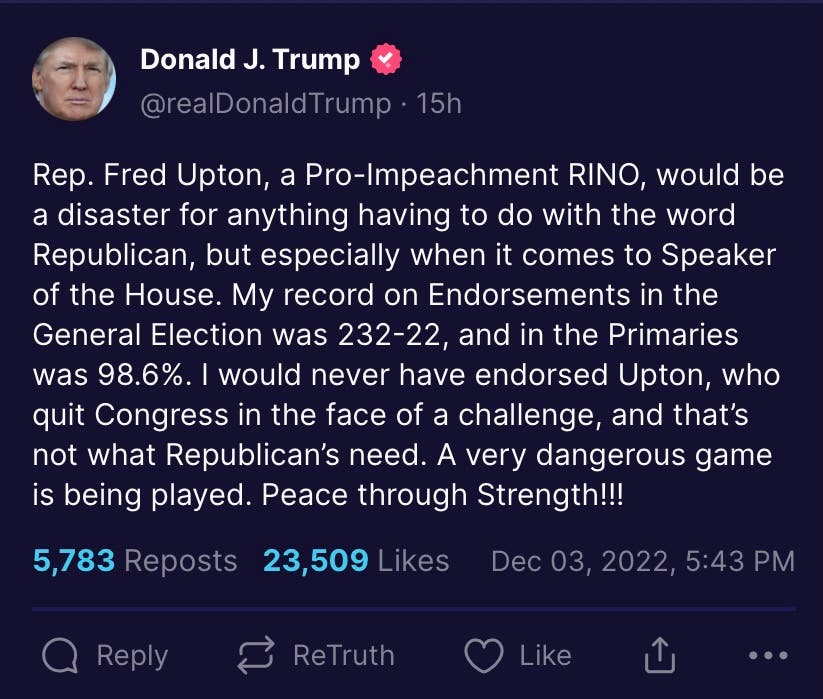 As one of only 10 House Republicans who voted to impeach Donald Trump in his second impeachment, the longtime representative announced his retirement from office in April of this year. And the former President gloated at the news, taking the opportunity to dig in his hateful hills, and claim “victory.”

“UPTON QUITS! 4 down and 6 to go. Others losing badly, who’s next?” Trump said in a statement.

But for the 68-year-old veteran politician, his time on Capitol Hill had run its course. After 35 years in politics, Upton saw the MAGA writing on Trump’s ketchup-stained walls.

“It is a little bit in that some of the folks here are so beholden to him that they don’t accept those of us that are willing to stand up,” Upton told NBC News.

With frontrunner Rep. Kevin McCarthy (R-CA) still lacking the votes necessary to take the majority leadership position in the House, centrist Democrats and Republicans have been caucusing on other alternatives, POLITICO reported.

This is believable considering Rep. Andy Biggs (R-AZ) managed to siphon 31 votes from McCarthy in a recent round. The GOP is working with a thin majority, and several Freedom Caucus members are vocal in their opposition to a McCarthy-led House.

As a vice chair of the bipartisan Problem Solvers Caucus — which pushes for civility and centrist legislation, such as the $1.2 trillion infrastructure package that was signed into law last year — Upton is widely respected on both sides of the aisle.

That makes his consideration to lead the House of Representatives less shocking and makes more sense that the two parties would join together in electing the representative.

The outgoing Michigan congressman hasn’t commented on the reports, or whether he would consider the offer. But apparently, just the insinuation was enough to send the temper tantrum-throwing ex-President over the ledge – and that’s a good sign.