While there are plenty of awful Republican women to revile, there’s a special place in Leavenworth for the climbing pile of traitorous Trumptrash that is Rep. Elise Stefanik (R-NY by way of a burning landfill on Staten Island).

“Trashy Stefanik” (not a nickname I made up, but props to its unknown genius creator) is like if a somewhat sentient bleached burlap sack somehow rose to prominence in the GOP purely based on spite.

Stefanik was out there on Wednesday justifying the Mike Pence classified documents story by saying he did nothing wrong and neither did her Daddy Donny, but Joe Biden did because he “weaponized the FBI” or whatever this week’s bullshittery is.

The Trumpocrite trashbag is lucky she didn’t spontaneously combust after letting this hot garbage fall out of her lying MAGAmouth onto that hideous Amish curtain she’s wearing. I don’t know, maybe she wants to be Steve Scalise’s sisterwife or something.

Stefanik explains how Mike Pence did nothing wrong and how Trump was treated unfairly but also how Biden’s actions are a national security threat. She also says the FBI has been weaponized against Trump and is engaged in a coverup for Biden pic.twitter.com/HwSne9khQm

Aside from her craven ambition, another thing I’ve noticed about Trashy is that we never see her hanging out with fellow MAGA Mean Girls Marjorie Taylor Greene and Lauren Boebert.

Trashy Stefanik only hangs out with the MAGA dudebros in the QAnon Qaucus because she hates other women.

Stefanik runs on pure MAGA meanness, and her need to be accepted by men is so obvious she might as well stamp “I LIVE FOR REVENGE ON PRETTY GIRLS” on her bland blank pallid forehead.

That’s why Trashy aligned early with fellow New York pile of Trumptrash Rep. Lee “Zippy” Zeldin to fully back MAGA plant George “Anthony Devolder Kitara Ravache Jingleheimer Schmidt” Santos and make sure he ended up in a House seat no matter how many lies or grifts they all had to perpetuate to get him there.

It’s almost sweet that Kitara turned it out for Elise. What an homage! 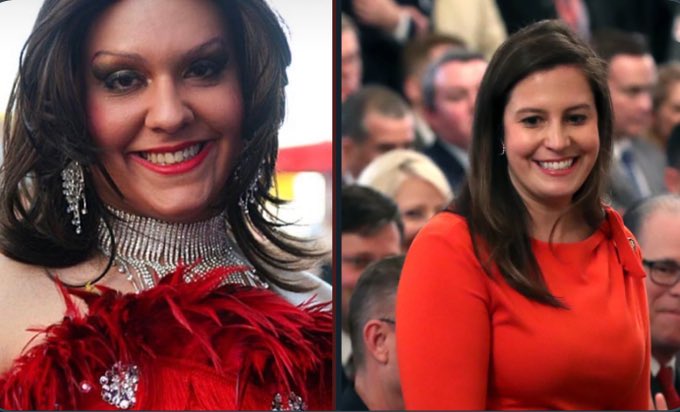 Twitter has certainly picked up on Trashy’s blatant attempts to climb over everyone to be Donald Trump’s best worst favorite, which she’ll never be because he’d only maybe rate her a 2 on one of those days when she bothers to put on makeup.

.@EliseStefanik knew that #GeorgeSantos was a fraud all along and supported him anyways. Like the worst of her MAGA party, she’s a poisonous opportunist who only cares about a vote. pic.twitter.com/0L5A6RQ0M5

Elise Stefanik has been criticized for supporting George Santos. She explains, "I met George while I was in Oz with Toto, and George was asking the Wizard for brains, courage, a heart and $700,000 in unmarked bills" pic.twitter.com/iLFEa5fo1X

Your regular reminder that the two most fervent, impassioned and ardent defenders of the GOP Member of Congress purportedly known as George Santos are:

Tara Dublin
Tara is a reported opinion columnist at Occupy Democrats. She's a woefully underappreciated and unrepresented writer currently shopping for a super cool novel that has nothing to do with politics while also fighting fascism on a daily. Follow her on Twitter @taradublinrocks
Latest Posts
Tags
donald trump Elise Stefanik George Santos Kevin McCarthy Kitara Ravache