STRANGE CHANGE: What the FEC is looking at in the financial statements of George Santos

Q: What did Donald Trump Jr say to his stepmommy/girlfriend Kimberly “Kimmy Golddigger” Guilfoyle after both the cringey premiere of his new show on Rumble (aka MAGA YouTube) and then later that night when he once again failed to satisfy her?

Because his Instagram videos weren’t cringey enough, Coke Drip Jr has brought his pathetic pleas for his father’s love to a show he’s calling “Triggered With Don Jr.”

It’s more like “What Triggered Don Jr THIS TIME” because there’s nothing lil Donnie won’t cry about in his desperately public pleas for his daddy to love him.

The press release for this lukewarm MAGA mess is so unintentionally hilarious that it would be cruel of me not to share at least some of it with you.

“The highly successful businessman, bestselling author, and political commentator brings his unique brand to ‘Triggered With Don Jr.,’ which will be released twice a week.”

“Trump Jr. said, ‘As a big believer in free speech and diversity of thought, I couldn’t be more thrilled to partner with a company that shares those values to launch my new Podcast – “Triggered With Don Jr.” While other Big Tech companies are focused on censoring dissent, Rumble is building a platform that welcomes it.'”

“Highly successful businessman”? Lol, okay, guy who stole from his own kids’ cancer charity and oversaw fraudulent payments to employees at the Trump Organization.

“A big believer in free speech and diversity of thought”? Methinks Coke Drip Jr doth protest too much, because he was the last piece in my Blocked By Trump Quadfecta scorecard. 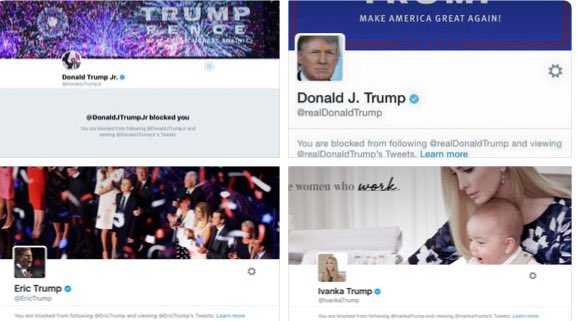 The new blockbuster show that’s going to change history got off to a bumpy start when its host realized he had nothing to say but ran his mouth anyway.

After ranting about nothing for an hour, Junior ran out of gas and turned to his co-host/boss/dealer/Melania 2.0 girlfriend for a bump — of approval, that is.

Junior whined about the way he’s treated “on other platforms” (i.e., everywhere) and Kimmy Golddigger did the whole “They’re just jealous of you, baby” gross pukey thing that someone earning $180K a year on the Trump payroll would say.

“This is what you do at home and now everyone gets to see,” Guilfoyle replied, and almost cracked what was trying to be a smile but couldn’t under all of the filler and Botox.

That might leave the viewers wondering if this is also what he does at home, whatever “this” is. Sound way way DOWN. Get ready to RUMBLE!

Tara Dublin
Tara is a reported opinion columnist at Occupy Democrats. She's a woefully underappreciated and unrepresented writer currently shopping for a super cool novel that has nothing to do with politics while also fighting fascism on a daily. Follow her on Twitter @taradublinrocks
Latest Posts
Tags
Donald Trump Jr Kimberly Guilfoyle Rumble Trump Organization