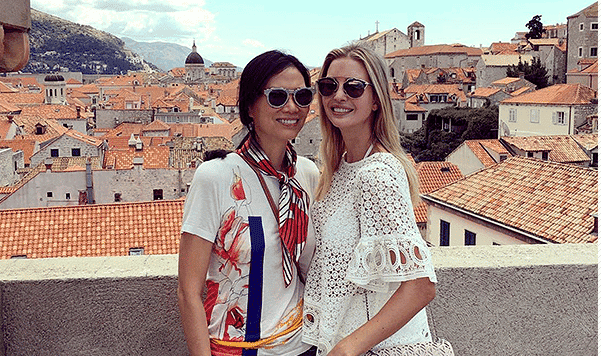 Surprise, surprise! Republican presidential nominee Donald Trump’s daughter Ivanka and the ex-wife of Fox News owner Rupert Murdoch and current girlfriend of Russian  dictator Vladimir Putin, Wendi Deng Murdoch, are best buddies who just went on a lavish vacation together. Might that explain Fox News’s unbelievably slanted favorability towards Trump’s despicable brand of politics? Could you imagine the outrage by Republicans if one of President Obama’s daughters were hanging around with Putin’s girlfriend? Fox News would found an entirely new channel for the sole purpose of harping on the subject around the clock. However, as is true to form, because the subject is Trump’s daughter they remain quiet as church mice. Similarly, Trump’s vow that he does not know or speak to Putin is now obviously proved untrue. Unless his supporters believe Putin and Trump have never spoken, and it is a mere coincidence that Trump’s daughter and Putin’s girlfriend just happen to know each other. Right — like the two met coincidentally at the supermarket while buying supplies to cook for the homeless. One really can’t make this stuff up.

Ivanka Trump and Wendi Murdoch were spotted palling it up on the coast of Dubrovnik, Croatia. As it happens, Wendi even played matchmaker and introduced Ivanka to Jared Kushner who she later married and they now have three children. How endearing, no? Trump, Murdoch, and Putin destroy the world while these two sip mai tais on a beach without a care in the world.

Trump had nothing but glowing reviews for the ex-wife of the Fox News billionaire. She said, “There’s nothing that doesn’t interest her, and she can hit five topics in a 35-second conversation. It’s really a whirlwind with Wendi. I can’t recall the last time I had a conversation with her that didn’t conclude with her connecting me to four people who might become great friends or great business opportunities.”

According to US Magazine:

Vladimir Putin and Wendi Deng, Rupert Murdoch’s ex-wife, are dating. Reports of the pair have been floating around for years, ever since their respective divorces in 2014 and 2013. One insider close to the powerful leader tells Us Weekly the relationship is “serious.”

With Ivanka’s cannibalistic instincts of manipulation, it shouldn’t come as a surprise that the media has touted her for a possible political career — something which she vehemently denies. In an interview with Harper’s Bazaare Trump’s female namesake denied the possibility she would ever run for office, “I made the mistake of once saying, ‘Never say never.’ I do believe that in life there are so many things I’m doing today that I never thought I’d be doing, so I generally take that perspective. But I said that, and the headline was ‘IVANKA MIGHT RUN FOR OFFICE,’ so… But, no, it’s not something I think I would ever do.”

If the American people are fortunate enough to dodge the bullet of a Donald Trump presidency, they will still have to keep in the back of their minds the possibility that some of Trump’s demon spawn may too attempt to ascend to the Oval Office. If their father’s brand of politics will be any measure of their own, the American people rightly should be vigilant to stamp out Trump’s children’s political careers before they have the ability to gain any traction.