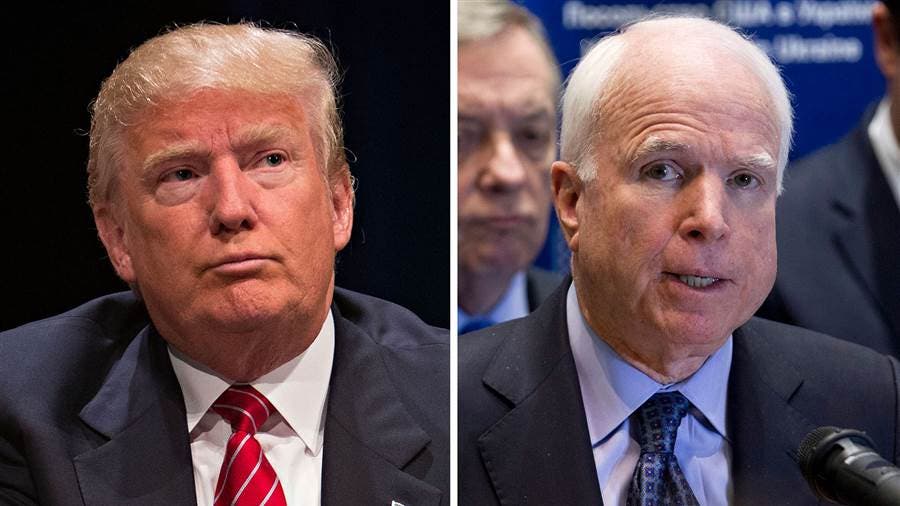 Sen. John McCain, the former Republican presidential nominee and one of the party’s most respected figures, became the latest GOP leader to publicly renounce Donald Trump over disgusting comments he made about women in a 2005 tape.

Sen. McCain has stood by Trump through the endless parade of disqualifying statements that has been his campaign. However, yesterday’s release of the tape – in which Mr. Trump brags about cMommitting sexual assault and demeans women in very lewd terms – was a breaking point for McCain, as it has been for many other Republicans who have steadfastly sacrificed their supposed moral values for months by supporting Trump.

In a statement released to Politico today, Sen. McCain strongly disavowed Trump and said that he and his wife would no longer be supporting or voting for him:

“In addition to my well known differences with Donald Trump on public policy issues, I have raised questions about his character after his comments on Prisoners of War, the Khan Gold Star family, Judge Curiel and earlier inappropriate comments about women. Just this week, he made outrageous statements about the innocent men in the Central Park Five case.

“As I said yesterday, there are no excuses for Donald Trump’s offensive and demeaning comments in the just released video; no woman should ever be victimized by this kind of inappropriate behavior. He alone bears the burden of his conduct and alone should suffer the consequences.

“I have wanted to support the candidate our party nominated. He was not my choice, but as a past nominee, I thought it was important I respect the fact that Donald Trump won a majority of the delegates by the rules our party set. I thought I owed his supporters that deference.

“But Donald Trump’s behavior this week, concluding with the disclosure of his demeaning comments about women and his boasts about sexual assaults, make it impossible to continue to offer even conditional support for his candidacy. Cindy, with her strong background in human rights and respect for women fully agrees with me on this.

“Cindy and I will not vote for Donald Trump. I have never voted for a Democratic presidential candidate and we will not vote for Hillary Clinton. We will write in the name of some good conservative Republican who is qualified to be President.”

McCain is one of dozens of prominent Republican leaders who have withdrawn their endorsement for Trump in the past 24 hours, including Gov. John Kasich, Sen. Mike Lee, and former Gov. George Pataki. While their continued embrace, however tepid, of Trump through all the horrible and bigoted things he’s said negates any moral high ground they may be seeking in abandoning him, the mass exodus is a sign that Trump may have finally crossed the line in the eyes of the party establishment.

Indeed the revelations of Trump’s violent misogyny are causing so much strife in the party that the RNC has withdrawn some financial support, many are calling for him to drop out of the race, and even his running mate Mike Pence refused to defend him.

Whether the voters are as disturbed as the party establishment by the most recent revelations of Trump’s misconduct remains to be seen, but there is ample evidence that they will be. Indeed many commentators have already decided that the tape has sounded the death knell of Trump’s campaign, and the litany of renunciations in the past few days would seem to confirm that. In any case we may finally be watching the long-delayed self-destruction of a campaign built on hatred and lies. Better late than never.