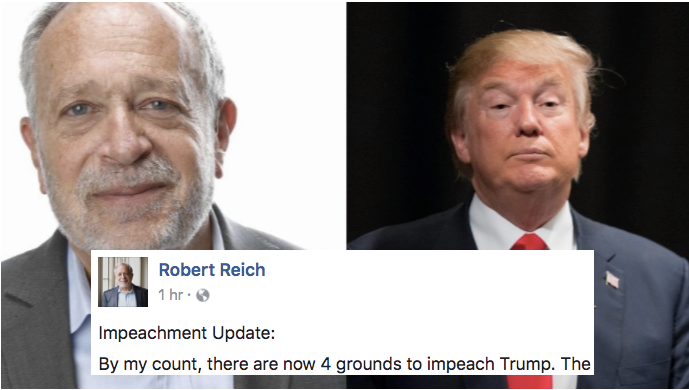 Dan Rather Just Exposed Trumpcare As A Massive FRAUD

Robert Reich continues to be relentless in his pursuit of ethical government.  In a post today, he held Trump’s feet to the fire, quoting every article of the Constitution that the President has already violated. He began with:

1. In taking the oath of office, a president promises to “faithfully” execute the laws and the Constitution. But Trump is “unfaithfully” executing his duties as president by accusing his predecessor, President Obama, of undertaking an illegal (and impeachable) act.

Faithfulness is not one of the thrice-married president’s primary values, so it’s not surprising to see him bring a lack of truthfulness to the office.

2. Article I Section 9 of the Constitution forbids government officials from taking things of value from foreign governments. But Trump is making big money off his Trump International Hotel by steering foreign diplomatic delegations to it, and will make a bundle off China’s recent decision to grant his trademark applications for the Trump brand – decisions Chinese authorities arrived at directly because of decisions Trump has made as president.

This is the oft-quoted Emoluments clause. Trump’s refusal to release his income taxes means that there may be even more violations of this constitutional mandate.

3. The 1st Amendment to the Constitution bars any law “respecting an establishment of religion or prohibiting the free exercise thereof.” But Trump’s ban on travel into the U.S. from six Muslim countries – which he initiated, advocated for, and oversees – violates that provision.

Despite trying to deny that his executive order on immigration actually constitutes a ban on Muslims, Trump continually made it clear that he intended to implement just such a ban during his campaign.

4. The 1st Amendment also bars “abridging the freedom … of the press.” But Trump’s labeling the press the “enemy of the people” and choosing whom he invites to news conferences based on whether they’ve given him favorable coverage, violates this provision.

Not all press is equal, of course. Ultra-right wing bloggers seem welcome in the White House Press room while legitimate news outlets like CNN, the NY Times, and Politico have been banned.

The fifth reason is still pending investigation, but everyday more news points to the likelihood of definitive evidence being uncovered.

5. Article III Section 3 of the Constitution defines “treason against the United States” as “adhering to their enemies, giving them aid and comfort.” Evidence is mounting that Trump colluded with Russian operatives to win the 2016 presidential election.

Reich is pulling no punches with his accusations of treason. He remains one of the most ardent and persistent progressive activists working to protect our Constitutional rights today. Read his entire post here.