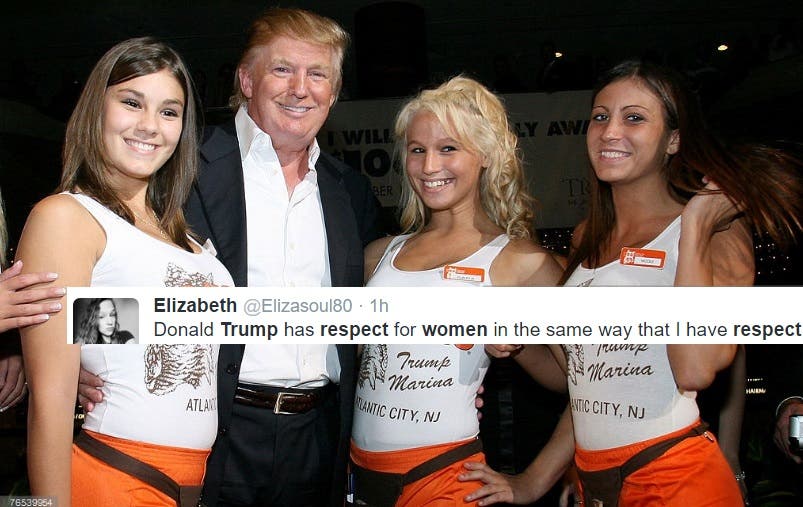 Today is International Women’s Day, a day to remember the long struggle of women around the world for basic rights and dignity, and a day to recognize that the fight is not over. President Donald Trump ‘celebrated’ by sending out a token tweet claiming to respect women.

I have tremendous respect for women and the many roles they serve that are vital to the fabric of our society and our economy.

As we all know by now, respect is the last thing that Trump feels towards women. He has a long history of objectifying women, sexually harassing and assaulting women, denigrating and demeaning women on the basis of their gender, and expecting women to be subservient to men.

Twitter users quickly responded by highlighting examples of Trump’s disgusting treatment of women and emphasizing that women are not going to accept his audacious tweet.

The women you "respect" have a message for you. #ADayWithoutAWoman pic.twitter.com/4tYDx2de9R

Donald Trump has respect for women in the same way that I have respect for people who say Tom Cruise is their favorite actor.

If only we could catch Trump on video saying what he really thinks about women!

By the way, we KNOW you didn't post this: it's iPhone not Android. It's your team lying on your behalf. The real you is >> pic.twitter.com/J4xLzb5i6d

When You read that Trump respects women. pic.twitter.com/cxNz4EljTo

.@ChelseaHandler calls out Trump after POTUS tweets of his "tremendous respect for women" https://t.co/mmenYUuFFQ #InternationalWomensDay pic.twitter.com/YkjeJkKlRH

.@realDonaldTrump How about this? Respectful? pic.twitter.com/zgJEQQ6x4W