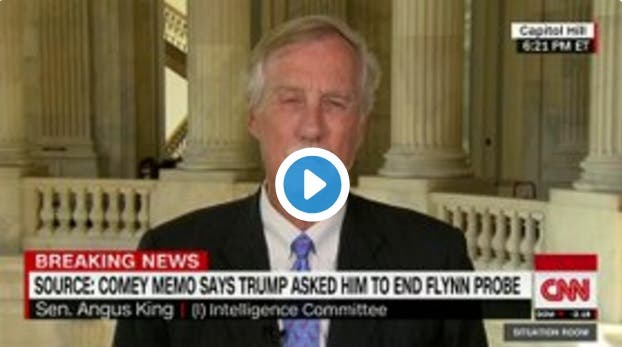 One of only two true independents among the 100 U.S. Senators, Angus King of Maine, has tried to navigate his own path between the Democrats and Republicans,

The former Governor of Maine, who is a trained lawyer, has given President Trump a wide berth to do as he pleased – until now.

Today, King told Wolf Blitzer on CNN he can no longer remain silent. Blitzer had asked him if he thought we were going to have to consider impeachment proceedings.

“Reluctantly I have to say yes,” he said on CNN, “simply because obstruction of justice is such a serious offense.”

“This is not something I have advocated for,” continued King. “The word [impeachment] has not passed my lips in this whole tumultuous three or four months. But, if indeed, the president tried to tell the Director of the FBI – who worked for him – that he should drop an investigation, whether it was Michael Flynn or whether it was some investigation that had nothing to do with Russia or politics or the election, that’s a very serious matter.”

King alone can’t trigger the impeachment, but the fact he is now moving in that direction is a sign that even the most recalcitrant members of Congress now recognize that Trump is out of control and his appalling behavior has become a national emergency.

The Senate’s only other true independent is Bernie Sanders of Vermont, who unlike King has made his own unhappiness with Trump very public.